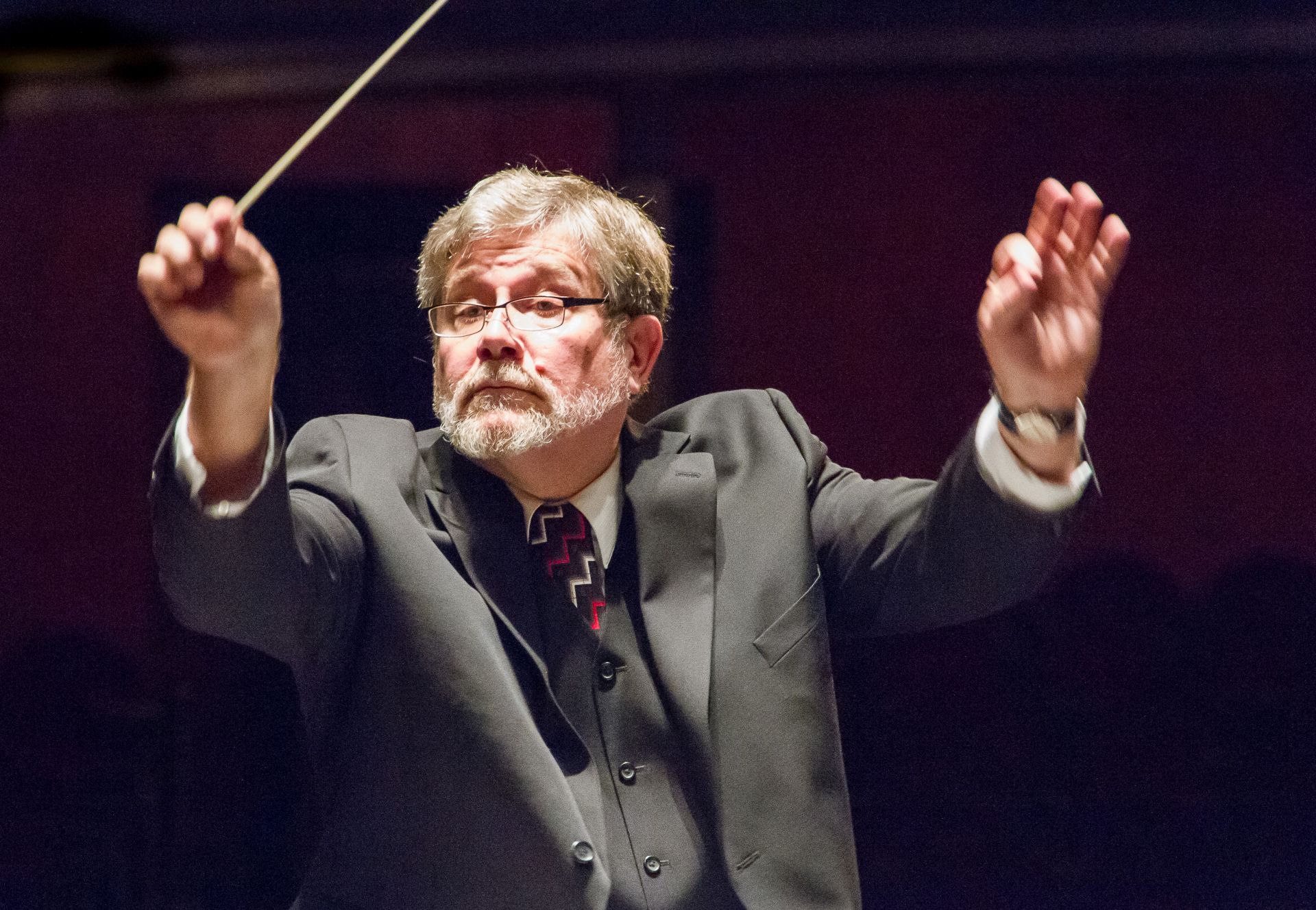 “Pioneers and Prodigies” on Sunday, May 7 will be the final Symphony Sundays concert with longtime conductor Monte Perkins, who has shared his exceptional talents with FCS since 1963.

From the Vagabond Ski & Social Club, Audience Members and Fans of Monte for Many Years:

The Vagabond Ski & Social Club would like to convey to you, Monte, our very special thanks for the wonderful musical experiences and enjoyment that you provided us for four concerts a year for nearly 20 straight years. Most of us had only a limited background in symphonic and classical music before we started coming to the Festival City Symphony Sunday concerts. But, oh, how much we learned through you about the composers, their music styles, concertos, symphonies, and so on because of your in-depth talks and information before or after virtually every work performed. We got to the point where we looked forward to each and every one of your concerts just to hear your insights into that day’s composers or what we should particularly listen closely to during the pieces themselves. We wish you the very best in your continued music and life endeavors, hoping that you will realize the joys, enrichment, and fulfillment that you added to each of our Vagabond lives.

What a wonderful life we have to be sharing the joy of making music together since our college days. I am grateful to you for your interesting programming and dedication to the success of the Festival City Symphony through the years. You have left your imprint on this wonderful organization for which I am grateful. Congratulations to you for your many years with Festival City Symphony.

We all know that there is often a strong and energetic woman supporting her partner. Thank you for being that support for Monte. And, thank you for continuing to use your creative energy to inspire the young children eager to hear an orchestra at the Pajama Jamboree Concerts.

Congratulations on your outstanding leadership of the Festival City Symphony, Monte!  You were the first person to believe in me all those years ago at the Wisconsin District MET auditions, when you offered me my first professional orchestra gig! It seems rather fitting that I started off my career with you and the FCS singing Samuel Barber’s Knoxville: Summer of 1915; a moving testament to a close knit community, which is exactly what you have built at FCS. It is also rather fitting that our last performance together was of Strauss’ Four Last Songs; a remarkable reflection about moving forward in life with calmness, acceptance, and dignity, which you have shown us all how to do. Thank you for filling my life with musical memories that will last a life time. Wishing you all the best on your next act!

Jayne, your dedication to bringing music to children in our community is unparalleled. It was an honor to be part of the Pajama Jamboree Series! I absolutely loved watching the faces of all the children during the concert. It reminded me, yet again, that musicians have such an incredible impact in our communities. Thank you for everything you have done, and continue to do to bring our art form to the forefront. Both Monte and the Festival City Symphony are lucky to have you in their corner!

Congratulations on many years of music making with the Festival City Symphony, and thank you for setting the example that classical music is for everyone, at any age!

Best wishes to you both.

Congratulations on your retirement, Monte! I wish you and Jayne many adventures, musical and otherwise. Thank you for the dedication, hard work, unique programming and humor that you have contributed to make FestivaI City Symphony the best orchestra it can be and truly a gem in the community.

I wish you all the happiness of the world on this new chapter in your lives. It has been a pleasure making music with you. Monte, I hope we will play together again as we did a couple of years ago at Music By The Lake with Dan Roberdeau! Jayne, thank you for your support and the delicious sweets.

After working with conductors for over 40 years you are my favorite. With you what one sees is what they get. You don’t have hidden agendas, no politics. It’s about the music. Finally a conductor where the music is king.

I will admit I didn’t like all of the newer American composer selections. Thus I had to practice by the M & M method. One M & M for each line of music practiced.

Thank you.  I will miss you at the podium.

Thank you for making the audience feel comfortable with your words of wisdom on the music before it is performed. Your words apply to all generations.

It’s great that your wife helps out with the PJ Concerts and that it is a family affair. It is very joyful to see the kids in costumes and PJ’s.

Thank you for all of your hard work.

I’m sure Monte doesn’t remember me, but I studied private bassoon with him back in the 90s. Almost 25 years later, I am a high school music teacher. Thank you for helping me love the bassoon and love music generally.

Read more messages for Monte in the comments!

MONTE PERKINS PHOTO GALLERY – BLAST FROM THE PAST

JAYNE AND MONTE GALLERY – THROUGH THE YEARS WITH FCS

After nearly 30 years as Music Director and Conductor of Milwaukee’s Festival City Symphony (FCS), Wisconsin’s oldest continuously performing orchestra, Monte Perkins will retire after the season concludes on May 7, 2017.

Perkins began with the orchestra, named the Milwaukee Civic Orchestra until the group rebranded in 1993 to Festival City Symphony, in 1963 as a member of the bassoon section, becoming principal bassoonist in 1964. Perkins was promoted to Conductor and Music Director in 1990, replacing Milwaukee icon Edward Mumm, longtime concertmaster and assistant conductor of the Milwaukee Symphony Orchestra.

Perkins will continue to conduct Festival City Symphony’s Pajama Jamborees for the upcoming seasons. The replacement music director and conductor of the Symphony Sunday subscription series is Carter Simmons.

Under Perkins’s leadership, the orchestra established itself as a fixture in Milwaukee’s thriving creative community. “It was critically important to me that a group with as much local history as FCS remained focused on employing Southeastern Wisconsin professional musicians, featuring soloists from or with strong ties to Milwaukee and was accessible to any member of the Milwaukee community that wanted to experience live classical music,” said Perkins. “I’ve been honored to both witness and be a part of the evolution of the Milwaukee arts community over the last 60 years. I am proud that FCS’s legacy of timeless music played by great local musicians for engaged community audiences will continue for seasons to come.”

Franklyn Esenberg, chairman of the board and chief executive officer of the Festival City Symphony, said, “Monte has been the heart and soul of the orchestra. He has made classical music accessible to any audience through his family-friendly programming and approachable style, including his verbal program notes from the stage during Symphony Sunday performances.”

Perkins’s passion for the arts in Milwaukee began as a student at Milwaukee Custer High School, from which he graduated in 1964. Perkins received his undergraduate degree in bassoon performance from UW-Milwaukee, followed by receiving a master’s degree in performance and music history from the Wisconsin Conservatory of Music in Milwaukee. Perkins played bassoon with the Milwaukee Symphony Orchestra for 25 years, was a charter member and remains principal bassoonist for the Milwaukee Ballet Orchestra and served as an on-air voice of classical music at WFMR radio in Milwaukee in the late ‘70s, ‘80s and early ‘90s. Perkins retired from his 27-year position as the head of the bassoon studio at Lawrence University Conservatory of Music in Appleton, Wisconsin in 2012.